My Great Expectation Working on TEDxBristol

Checking my LinkedIn newsfeed one day I saw that a connection of mine had put up a post about TEDx coming to Bristol in November. “That sounds great” I thought and quickly bought myself a ticket, smug in snaring the early bird and having a day off work to listen to some inspiring speakers and do some networking.

A few weeks later, thanks to that connection, I found myself sat having lunch with Mel Rodrigues, TEDxBristol 2015 Curator, offering up what little free time I had to help her out with some speaker liaison duties. That’s OK I thought, I will still be able to sit in and watch the talks…little did I know!

Off I went that Wednesday night to the first of many TEDxBristol team meetings and my imagination was well and truly captured – this was a team passionate about the event’s success and about the speakers’ ideas worth spreading. Also I knew this was too good an opportunity to miss – the sheer scale of the event was a logistical and operational dream come true for an event geek like me. So I offered to take on the facilities and logistics management of all TED elements in the Atrium as well.

My team were responsible for populating the Atrium area and ensuring it ran like clockwork during the non-talk times. Basically almost everything the delegates saw in this area – all design and print, zone areas, t-shirts and passes as well to knowing what time the KeepCups were being delivered and deciding what lanyard colours to use. Never before have I sellotaped so many signs to so many seats, bought as much crew munchies nor walked as far during an event*.

Luckily I had already managed two large exhibitions at Colston Hall but TEDxBristol was a different beast altogether, we were using the venue in a totally different way, the audience profile was different, there was a set agenda to follow, strict TED guidelines to adhere to not to mention no budget with everyone giving their time and their all for free. What struck me most was that every single one of us involved in putting on the event already had busy lives – jobs, second jobs, families, other commitments – and were doing this on a totally voluntary basis. Regardless, we all threw ourselves into the spirit of TED with gusto to ensure we surpassed the delegates’ #GreatXpectations on the day!

There were teams working on speaker arrangements, production, marketing, staffing, catering – all working together to ensure we maintained the bigger picture even though we were primarily focussed on our individual areas. This was team work on a huge scale. Everyone was committed to it being a success and any other option just wasn’t an option.

The experience of working on a global brand like TEDx has surpassed my greatest expectation of it and so did working with a group of professional people motivated by an inspirational Curator and the drive to do the best by the speakers for the people of Bristol and the region. For once this wasn’t about money and profit and it was all the better for it and I am proud to have been a cog in the TED wheel. 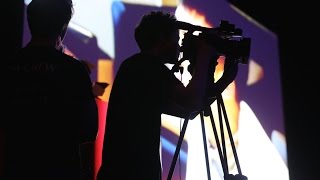 Behind the Scenes at TEDxBristol 2015

From building stages to presenting on them

Behind the Scenes at TEDxBristol 2015

My Great Expectation Working on TEDxBristol